What a crazy year this has been, unlike anything we could have even dreamed of. I’ve been thinking about how we would have dealt with the ever-worsening pandemic. We’d both be working from home, and in each other’s space more often than not. There would have been friction, but we would have worked through it. We faced a lot of adversity together, and that was what made it all bearable: we did it together.

The worst part of the last twelve months has been the isolation. You were always my rock, the one I could lean on when I needed support, and I really could have used that. If not for Nora and Charlie I’d be in a far worse place, but they have helped keep me afloat. You only had Nora’s company for less than a year, and Charlie’s even less than that. Although we both agreed to adopt them when the time came, you had to persuade me each time. In a way, they’re a lasting gift from you, one that I treasure.

It never fails to surprise me that it’s been four years. It feels like a long time, but also like yesterday. Last week I was explaining an issue with the bank and mentioned your passing and it was like stating a fact, neither good nor bad, but something that happened. Time brings some degree of emotional distance, I suppose; not from you, but from the event. I guess it’s a coping mechanism. Our lives were (and continue to be) intertwined, and every day I am reminded of you in a thousand different ways. I smile at the reminders, remembering our time together, more often than I feel the pain of loss, and that’s as it should be.

I love you so much, Dan. 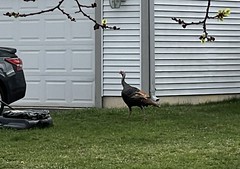