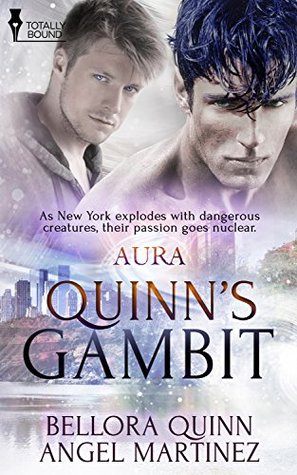 After a terrible magical accident at Berkeley created unpredictable holes between realities, all manner of non-human creatures started popping into our world. These displacements, called Random Anomalous Reality Events or RARE, have taken magic out of fiction and relocated it firmly in reality, resulting in a great deal of chaos and confusion. Displaced elf Valerian works with AURA, the Agency of Unnatural Resettlement and Assimilation, to intercept these beings as they appear in the human world, helping the peaceful ones and subduing the violent, malevolent ones. It’s good, satisfying work, and Val would be happy if he wasn’t so lonely.

Quinten is a young mage just trying to get by, but New York isn’t the easiest city to make a living in. If his methods are sometimes morally dubious, his heart is still in the right place. Of course, for Quinn, the right place means firmly locked away, protected at all costs. Living by his wits and sometimes magically induced luck, he works as a ‘freelance magic user’, or unregistered mage and small-time con, according to the authorities. The last thing Quinn wants is to draw the cops’ attention, but when an Event happens right on top of him, he’s forced to turn to AURA for help. Valerian isn’t at all what he’d expected in an AURA cop, and he certainly wasn’t expecting to join forces with the sexy elf, a snarky drow and a bitter incubus, when certain individuals in power try to stop the RARE by any means necessary.

Things are not all what they seem at AURA headquarters, and a greater evil lurks at the top than anyone could have imagined.

Quinn’s Gambit (AURA #1), by Bellora Quinn and Angel Martinez
Rating: 4 out of 5

This one was quite an enjoyable read! I love the world that Quinn and Martinez have created here. The magical accident referred to in blurb happened decades ago a kind of new normal has been established, but I liked how the situation continued to evolve, and the characters are forced to adapt. I had a few questions about what is going on outside of the New York City as the events of the book are going down, but that’s a small thing that’s peripheral to the book.

Quinn is a bit of a stereotype (talented rogue who resists authority), but at least he’s a pretty nice guy. Val is a bit more complex, and seeing him try to place status roles from the elven society he knows over the human society he is now forced to live in is fascinating to read. Nowhere is this more evident than when he has to work with Kai, a drow (dark elf) who would be his enemy back home but is his co-worker now. I enjoyed seeing their complicated relationship evolve. Quinn and Val make a cute couple, but they do suffer from that dreaded disease common in romance stories, communicationus interruptus. So much of their issues could be worked out if they just talked to each other like adults. That frustrated me at times.

The secondary characters here are great fun, including Kai and his doting yeti boyfriend, a gay incubus who by nature takes his life essence from women, and others. They help to create a rich background for a story that is fast-paced, up to a point. The book has almost an extended epilogue in which we see more of Quinn and Val’s relationship and watch the stage be set for the future books in the series.

I recommend this if you like urban fantasy with some great world-building and fun, quirky characters.