Into This River I Drown, by T.J. Klune

At once an exploration of grief and faith, Into This River I Drown is one man’s journey into the secrets of his father and discovering the strength to believe in the impossible.

Five years ago, Benji Green lost his beloved father, Big Eddie, who drowned when his truck crashed into a river. All calledit an accident, but Benji thought it more. However, even years later, he is buried deep in his grief, throwing himself into taking over Big Eddie’s convenience store in the small town of Roseland, Oregon. Surrounded by his mother and three aunts, he lives day by day, struggling to keep his head above water.

But Roseland is no ordinary place.

With ever-increasing dreams of his father’s death and waking visions of feathers on the surface of a river, Benji’s definition of reality is starting to bend. He thinks himself haunted, but whether by ghosts or memories, he can no longer tell. It’s not until the impossible happens and a man falls from the sky and leaves the burning imprint of wings on the ground that he begins to understand that the world around him is more mysterious than he could have possibly imagined. It’s also more dangerous, as forces beyond anyone’s control are descending on Roseland, revealing long hidden truths about friends, family, and the man named Calliel who Benji is finding he can no longer live without.

Staggering. What T.J. Klune does with this book is simply staggering and damn near overwhelming.

The atmosphere and emotions in Into This River… are just as much central characters as Benji and Cal. By the end of the book, I could imagine standing at Mile Marker 77 and know what it looks like, how it feels. The grief, pain, hope and love experienced here damn near leave me speechless. As always, I am amazed at the depth of feeling that T.J. Klune can evoke with his writing.

This is a weighty book, and definitely not an easy read (at least it wasn’t for me). I had to take a break and read something a bit lighter every now and then! That said, it was extremely rewarding. I would urge any reader to stick it out through the halfway mark, because the latter half of the book is one hell of a ride.

I am glad that I have read other books by Klune before reading this one. Many of the themes (and indeed phrasing) featured in Wolfsong (reviewed here) are repeated here, though this does not detract in the least – rather, I feel it allows a glimpse into the author’s thinking.

Side note: Damn, that cover is great, and so very suited to this book. 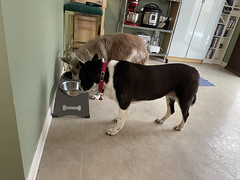