Jordan O’Neill isn’t a fan of labels, considering he has a few. Gay, geek, a librarian, socially awkward, a nervous rambler, an introvert, an outsider. The last thing he needs is one more. But when he realizes adding the label ‘asexual’ might explain a lot, it turns his world upside down.

Hennessy Lang moved to Surry Hills after splitting with his boyfriend. His being asexual had seen the end of a lot of his romances, but he’s determined to stay true to himself. Leaving his North Shore support group behind, he starts his own in Surry Hills, where he meets first-time-attendee Jordan.

A little bewildered and scared, but completely adorable, Hennessy is struck by this guy who’s trying to find where he belongs. Maybe Hennessy can convince Jordan that his world hasn’t been turned upside down at all, but maybe it’s now—for the first time in his life—the right way up.

Upside Down, by N.R. Walker

Nobody writes adorkable like N.R. Walker! Her low-angst, character-driven novels are always refreshing and enjoyable, and this book was no exception. Jordan is a nerdy sort, whose social anxiety leads to nervous chatter which actually gets to be pretty endearing. Hennessy is more laid-back, but more of a techno-geek. What begins as an crush on a stranger on a bus blossoms into something beautiful and charming.

One of the things that I loved about this book were the side characters: Merry, Jordan’s stoic co-worker and best friend, Angus, Jordan’s sweet-but-dense roommate, Michael, Hennessy’s best friend and boss. I especially got a kick out of “The Soup Crew”, strangers on the bus who become invested in Jordan and Hennessy’s growing relationship. As I’ve seen in other books, Walker has a tendency to tie the side-characters together neatly with some convenient coincidences, but that’s a minor nitpick.

As mentioned in the blurb, the story is about an asexual relationship, and Jordan’s coming to terms with his own asexual orientation. Recognizing that this is a concept that is new to many, Walker makes an effort to clearly explain what asexuality is and is not, and that is something that is much appreciated. As a man who continues to come to terms with his own asexuality this book spoke to me on a very personal level, and I could absolutely identify with a lot of Jordan’s feelings. The fact that asexuality is a spectrum not a fixed point is frequently frustrating, and for that reason Jordan’s self-doubt is quite relatable.

I listened to this on audio and while the story was great, I had some minor issues with Glen Lloyd’s narration. Some pauses between chapters and paragraphs where the setting changes would be appreciated. Also, the voices used for Hennessy and Jordan were very similar, at least to my American ear, making it difficult to tell who was talking at times.

I really enjoyed Upside Down and would highly recommend it to anyone, though it is especially good if you want to learn more about asexuality.

Note: To find out more about asexuality I suggest checking out The Asexuality Visibility and Education Network, which is a trove of useful information. 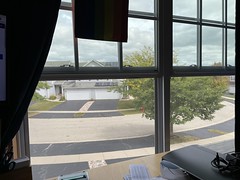