Looking at my Goodreads ratings, my reviews broke down to:

No low ratings? Why is that?

One reason my reviews are as high as they are is that I do lean heavily on Goodread’s aggregate reviews. If a book’s rating is less than 3.70, there has to be something pretty spectacular for me to pick it up. Like Yelp, Amazon or anything else, though, a book has to have a significant number of reviews for any rating to be meaningful. I usually look for at least 100 reviews.

I loved Kris Bethke’s “Requiem Inc.” trilogy. I wrote a detailed review of the first book, and I’m happy to say that the second and third books continued with compelling characters and engaging plotlines. This is a series I will be coming back to as a form of “literary comfort food.”

Sam Burns’ Rowan Harbor Cycle was a fantastic discovery of a new-to-me author. All told the series will be three trilogies; the first two trilogies were published in 2018, and the seventh book is about to come out as I write this (I reviewed the first book, Blackbird in the Reeds, in detail). Burns has created a fantastic setting here, a remote Oregon coastal town secretly populated by all sorts of paranormal folks – witches, shapeshifters, vampires, and more. For the most part, though, they lead pretty normal lives. The dramatic tension comes from outside threats to the town and its denizens. I adore the main characters here. Devon, Jesse, and Fletcher each have a time in the spotlight, and each finds their match who complements them well. With a large ensemble cast it would be easy to get lost in who’s who, but Burns does a great job keeping the focus narrow enough that the reader doesn’t lost, but wide enough to tell a larger story.

I’m way late to the game on this series, but K.J. Charles’ A Charm of Magpies series (I wrote a detailed review of the first book, The Magpie Lord) was a delightful find. I normally shy away from historical romances because of the homophobia that tends runs throughout, and while it exists here it’s in the background. These novels are set in Victorian England, but one in which practitioners (users of magic) are a part of society. The interplay of class friction, social machinations, and evil magic makes for some very enjoyable tales. I listened to these on audio, and Cornell Collins’ narration was spot-on, and his range of accents to denote not only a character’s voice but their class as well was extremely well done.

Austin Chant’s Peter Darling has us exploring what happened next in Neverland, and we find that things are not quite like what we may have read in the tales of Peter Pan. This is a stunning reimagining of Neverland, and touches on gender identity, the lies we tell ourselves, and roles we are forced into by others. This was hands-down the most imaginative and innovative book I read in 2018.

Amy Lane has a knack for creating some wonderful characters and then putting them through the wringer. Her Promises series remains one of my all-time favorites, but the Bonfires series (first book reviewed here) is shaping up to rival that. The main characters are in their forties and fifties, and have established lives and families. The stories of them getting together and creating one big family are just fantastic. Like most of Lane’s books, it’s the characters that I really enjoy, and Aaron and Larx are such a great couple that I really related to. This was another audiobook, performed by Nick J. Russo, whose work with each character’s speech patterns and inflections made some excellent books really outstanding!

The Delta Restorations series by Diana Copland is a lovely contemporary series that I enjoyed on audiobook. Again, great characters help create some compelling stories, with a bit of suspense thrown in.

Annabelle Jacobs’ Regent’s Park Pack series gives us a London in which werewolves are commonplace among humans. Pack politics, true mates, and happily-ever-afters abound. I tore through this series like popcorn, and I think it will hold up for rereading as well.

Ethan, Who Loved Carter by Ryan Loveless was simply stunning. It’s an intimate portrait of two characters in difficult situations, Carter, who lives with Tourette’s Syndrome, and Ethan, who has suffered a traumatic brain injury. This book really made me think about how we view people with disabilities or are just different, and it wasn’t always a comfortable read. Still, it was definitely one of the most enlightening books of 2018 for me.

By Fairy Means or Foul by Meghan Maslow (reviewed here) was an enjoyable goofy romp in a farcical fantasy world. Greg Boudreaux’s narration of the audiobook was brilliant!

Finally, In This Iron Ground by Marina Vivancos (reviewed here) was a werewolf novel where the werewolves more incidental than central to the plot. It’s a difficult story of a boy, Damien, growing up in the foster care system and learning to deal with abuse and the aftereffects. He finds a family who offers him escape and healing. That they are werewolves is almost peripheral, except that it introduces a kind of otherness that separates them from Damien. This was a deeply emotional book, and a very well-written one at that.

That’s the best of 2018 for me! Here’s looking forward to more wonderful books and stories for 2019. 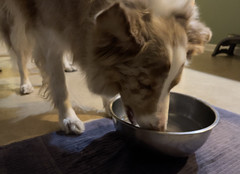